Opening Up Platform as a Service - What is Open PaaS? 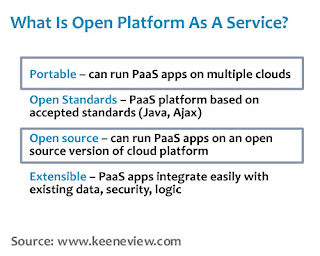 Platform as a Service (PaaS) offers a way to build and deploy applications entirely in the cloud. This market was pioneered by SalesForce and their Force.com PaaS offering.

PaaS offers the potential to democratize web development by enabling anyone who can use a browser to assemble and extend web-based applications. Yet early PaaS players, including Force.com, Bungee Labs, Google AppEngine and Microsoft's Azure, have introduced PaaS solutions that are remarkably proprietary.

A proprietary PaaS solution introduces high switching costs to move data or logic from one PaaS provider to another. For example, moving an application from the recently deceased Coghead to AppEngine would require a wholesale rewrite of an application written on one proprietary framework to another.

In short, customers adopting PaaS gain access to powerful new technical capabilities but at the cost of stepping back to the proprietary business models of 20 years ago. Surely the same market forces that have driven greater transparency in the enterprise software world will also prevail in the brave new world of cloud computing!

In talking with customers and analysts, WaveMaker has introduced the term Open PaaS to describe what the next generation of cloud development tools should look like. In our definition, Open PaaS solutions have four characteristics:
As the cloud evolves, it is inevitable that customers will demand more flexibility. With that in mind, WaveMaker recently became a supporter of the Open Cloud Manifesto, a very timely effort spearheaded by Reuven Cohen, CTO of Enomaly.