Larry Whistles Past the (Cloud) Graveyard

Now as usual with big whoppers told by people in fear of their checkbooks, Larry's rant has an element of truth. There is much cloud lipstick being sloshed on many a barnyard animal these days. But behind all the buzzwords, a basic shift is occuring - the wholesale outsourcing of core business applications.

Forrester research has a simple chart that illustrates Larry's dilemma - he paid $30B for a collection of low growth businesses, making Oracle is the Computer Associates of the new millennium (and we know where this strategy got CA).

Larry's rant is an extraordinary example of whistling past the graveyard. Oracle's huge transformation over the last 10 years has been from an infrastructure company (databases & middleware) to an applications company (ERP, CRM, SFA ect). Now, just as this transformation is completed, along comes an infrastructure that will obsolete all the applications Oracle just got done rolling up.

No wonder he sounds ticked - you would be too if you just spent more than $30B (see Oracle acquisitions chart below) on a bunch of wasting assets that are going to be shafted by the Cloud/SaaS shift just as Siebel's market share was eviscerated by SalesForce. 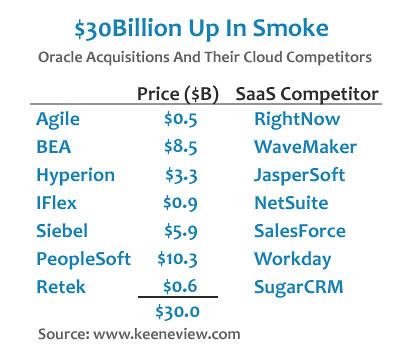 Not sure about your reasoning here... at least 3 in the "SaaS Competitors" column run on Oracle Databases, plus probably other Oracle software! Moreover Netsuite is owned by Larry ;-)

Yes, isn't it interesting that Larry has a runner-up cloud company and is choosing the cloud as an object of personal scorn? I think "runs on Oracle" is a check-box at this point - if Oracle had believed in the long-term future of their database business, they wouldn't have spent $30B getting out of that business would they?

It is wise of Larry to anticipate the downfall of DB business as the likes of mySQL getting significant adoption -- and I bet people will enhance MySQL to the scalability and reliability needs of most businesses.

It is wise to move to the applications suite, but gone are the days of CAL based license models and upfront SW costs.

SaaS pricing today is a black art, but I think you are right. Ultimately vendors will figure out a way to do value-based pricing that makes SaaS even more profitable than traditional enterprise licensing, but they will need to do this by offering value-added options that customers are willing to pay for and right now vendors are still too tied to monolithic software releases - this is another area where the cloud offers new possibilities for more frequent product revs and value added offerings.

Given that Larry owns part of Netsuite and part of Salesforce.com, I think he likely has at least as good a handle on SaaS as you do. What you leave out is that profits = R&D = future capability. And Larry can see that even leader CRM isn't making much, which means it can't invest much back into its products. Products that are cheap but don't keep up, aren't value. They're dead ends.

Larry clearly has a good handle on where SaaS is going now. I don't think he had that same clarity of vision three years ago when he started pouring $30B into a very expensive set of paperweights (but then again, Larry has always been partial to expensive toys).

Let me put this another way. Larry hired two bankers, Safra Katz and Chuck Phillips, and put them in charge of rolling up a mature industry. This happens all the time in industries like paper and concrete factories.

Here's the problem. Just as the bankers got done rolling up their supposedly mature industry, the industry morphed into a new direction with radically different economics.

Yes, 10% of Oracle's business is perfectly positioned to sail into this brave new world. The other 90% is just an expensive boat anchor. Hence Larry's new role as nay-sayer in chief for the idea that the tech world is changing in a direction that hurts his core business.

At Dabbldb they know how it works. Get your buisness custommers locked in and then increase your prices with up to 60%!

Another reason to start with opensource and run/hire your own servers. I think Larry is afraid that much more companies are going in the same direction.

Don't mistake one for another.